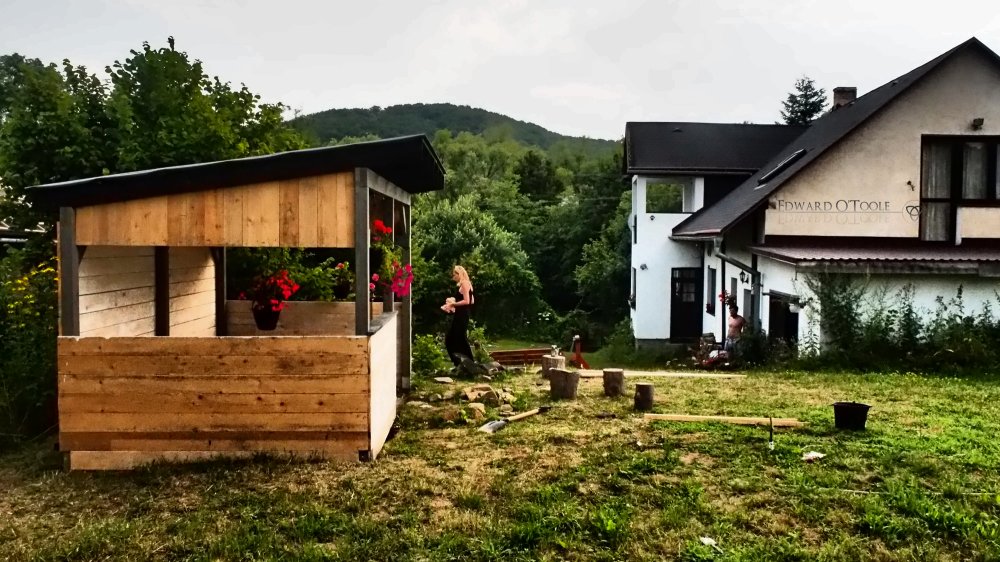 This year’s big work about the house was to build a woodshed as last winter saw us woefully unprepared. We had the wood but because there was nowhere to cut, chop and stack it, my sons and I had had to go out in literal blizzards to chainsaw metre-long logs, then chop them on an almost daily basis to keep any semblance of heat. Thus, this year we decided to make a proper woodshed.

Thankfully, my good friend Rusty came to the rescue and said he’d help (he makes wooden barrel saunas for a living). He told us to mark out and then dig a flat surface for the foundations so my sons and I set to work. The initial spot beside the old wooden house proved a pain in the arse. My garden is at the very end of a long hill slope so there are no flat areas, and over 4 metres there was a 70cm gradient where we planned to dig. Add to that ancient apple tree roots which we didn’t want to chop as it would kill the trees, we decided to build at the back area of the house, a place we only use for campfires as it gets very swampy. 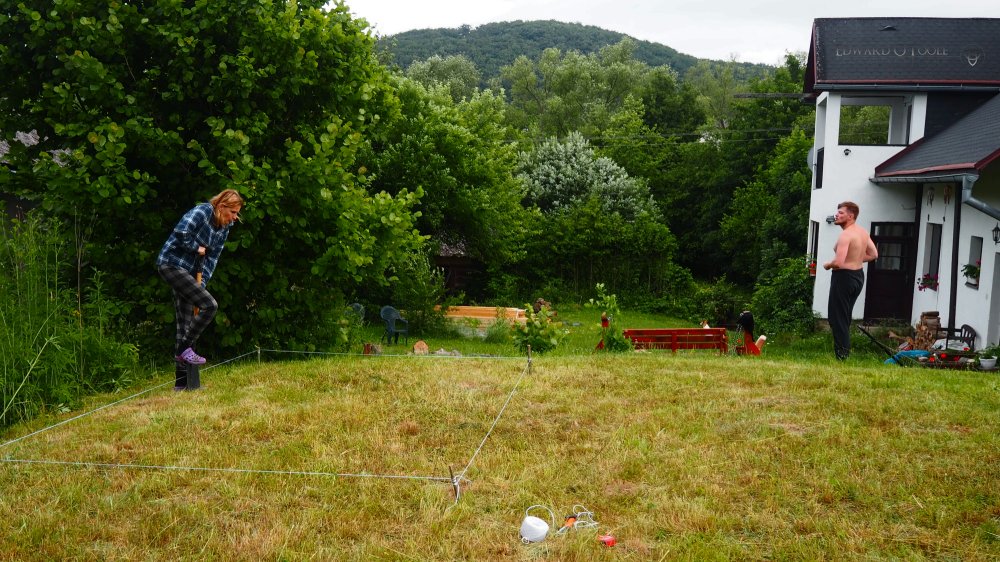 After agreeing on a basic design we ordered a load of beams and planks from a friend’s saw mill, dug out the basic ground plan and Rusty helped pick up the wood and get us started. Amazingly, he also had several much-needed power tools which made the job a lot easier. 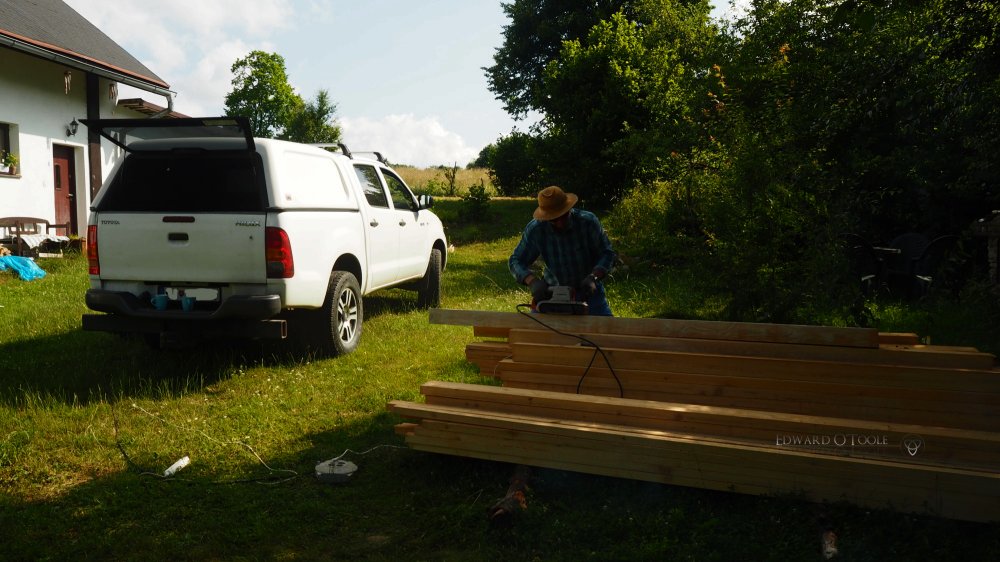 The boys helped him and we all learned a hell of a lot about wooden constructions in a short period of time. 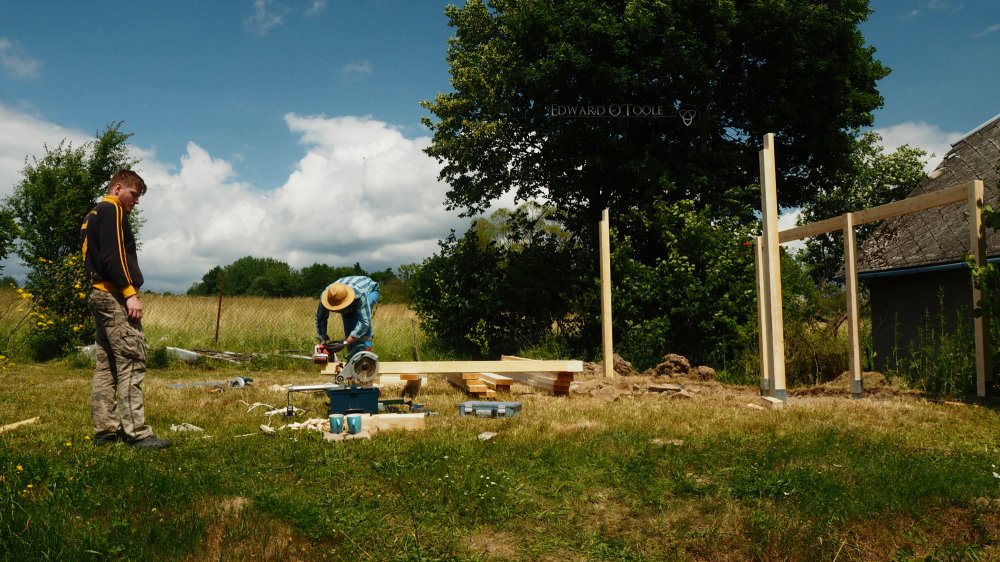 The temperature was scorching hot as it was in the middle of a heatwave, and there were many horseflies about which bit painfully and constantly, but at this stage it was still a good fun learning experience. With Rusty there to oversee we worked long, fast and hard, and we covered a lot of ground quickly. Plus my son Alex kept us entertained with music from his Bluetooth speaker 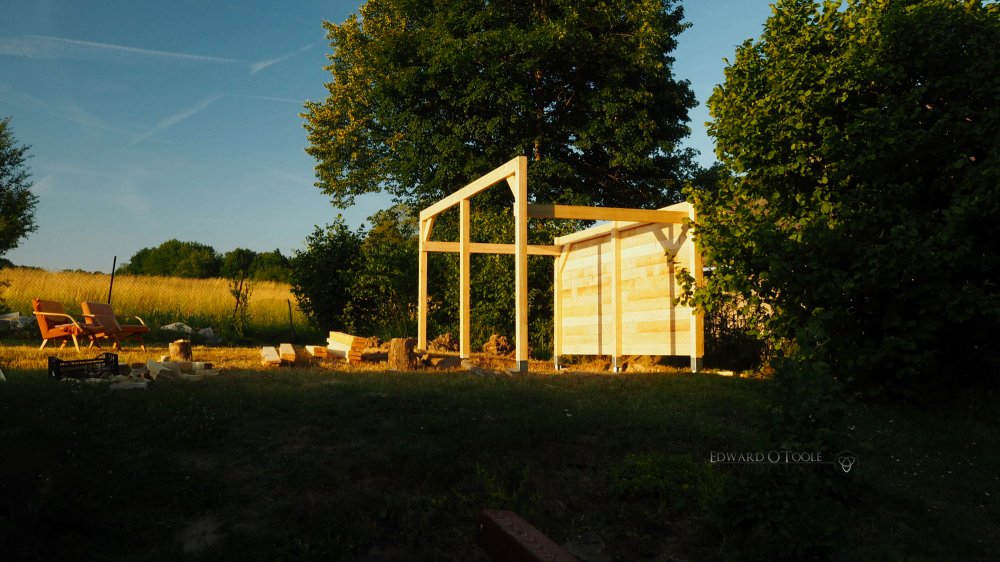 Due to other commitments on both sides we had a couple of weeks hiatus, during which we came to the conclusion that things weren’t going exactly as planned. But not in a bad way. Rusty is a perfectionist down to the last millimetre, and because of the high quality and strength of the wood we were using we realized that what we were building was too good for just a woodshed. Now, I’ve never wanted one but they’re ubiquitous in Slovakia – gazebos, called altanok out here. Everyone wants one as it means when you have guests you can seat and feed them outside rather than bringing them into your home. Altanoks are where you have all night slivovica and goulash parties, plus they keep you out of the extreme elements we get out here. As Rusty had also over-ordered on the wood, we decided to continue building with him a gazebo, and what remained we would build a much simpler woodshed down near the old wooden house, as originally planned. Due to time commitments, Rusty would help with the gazebo but the woodshed was ours alone to build.

So, while Rusty was doing things elsewhere, the boys accompanied me to the forest and we returned with some substantial hazel saplings to build the frame of the woodshed. We walked for kilometres in the heat with heavy trunks on our shoulders. It was really hard going, never mind felling them with a folding saw. My wife contributed by stripping the bark from them. 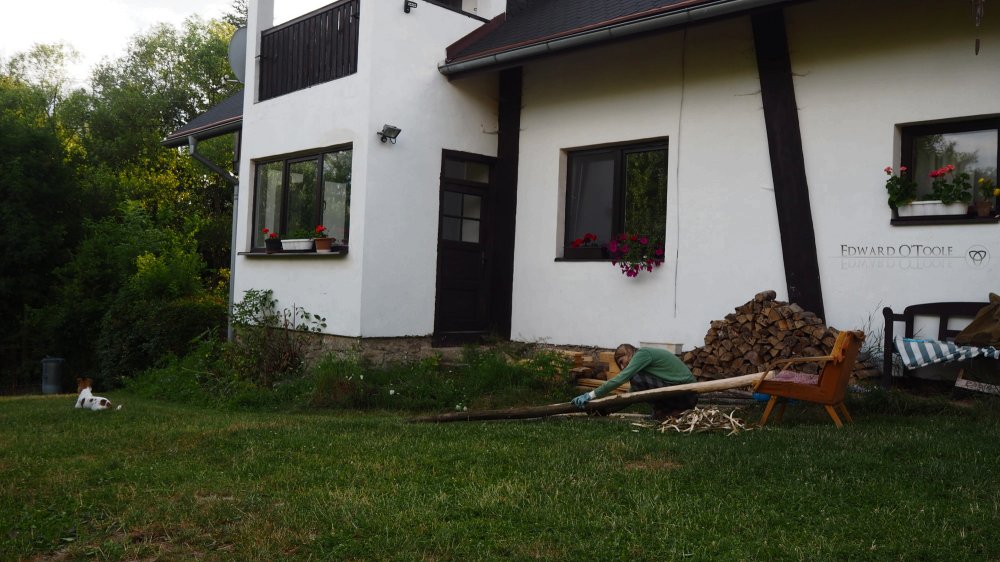 Without the use of Rusty’s power tools (aside from a cordless Bosch drill he lent me, which is one of the best things I’ve ever encountered in my life and I desperately want one) we resorted to hand tools such as a saw and hammer.  We also began fetching rocks from the stream at the bottom of the garden in preparation for building a short surrounding wall with which we could fill with soil and level the base out a bit. 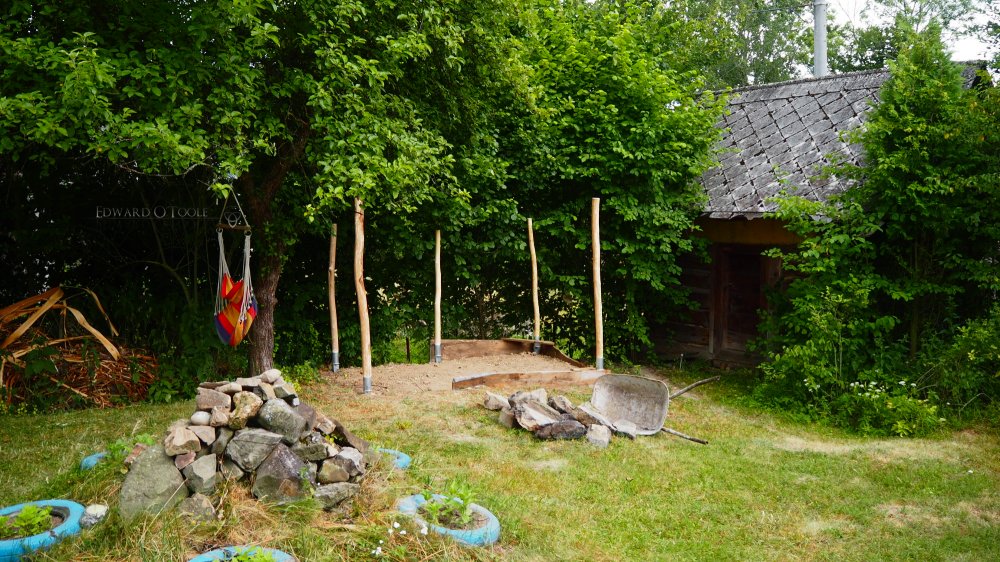 By this stage we’d been working on either the woodshed or the gazebo for several weeks, including having to dig both out and cut back brush. Without Rusty’s pacifying presence, tempers began to fray and the constant storms didn’t help. Also, the cost of building lurched above our budget level as were building two rather than one constructions. It seemed like every day money was just pissing away. The boys were beginning to hate waking up in the morning as they knew they’d have to graft all day, or at least just sit around waiting until I needed their help, and I was becoming more and more nervous as problem after problem arose. Thankfully, there were a few distractions such as Tilters going to Drienok motorcycle festival, or attending the wedding of the daughter of one of the club members. Difficulties in booking time with my younger boy, Alex, due to his busy nocturnal social life meant that my eldest, Brano, did most of the hard work. 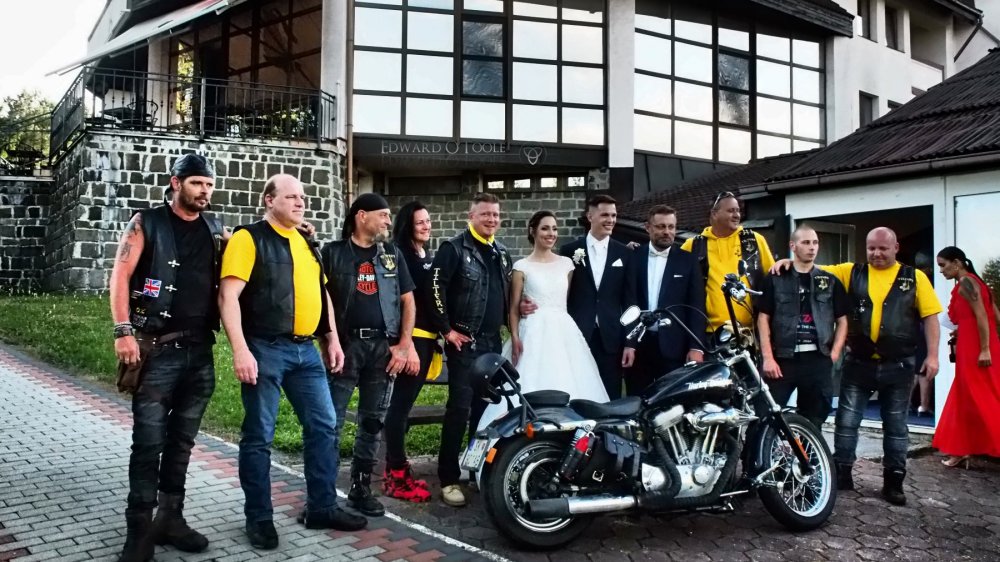 Day after day we slowly made progress and the woodshed began to take shape. 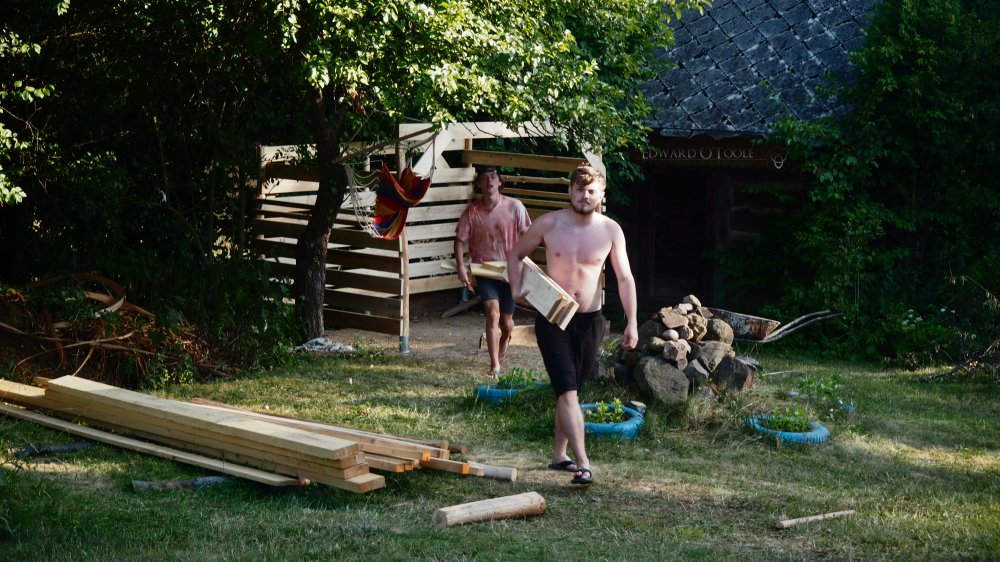 Eventually, Rusty returned, surprised at our woodshed. We got back to work and focused once more on the gazebo. 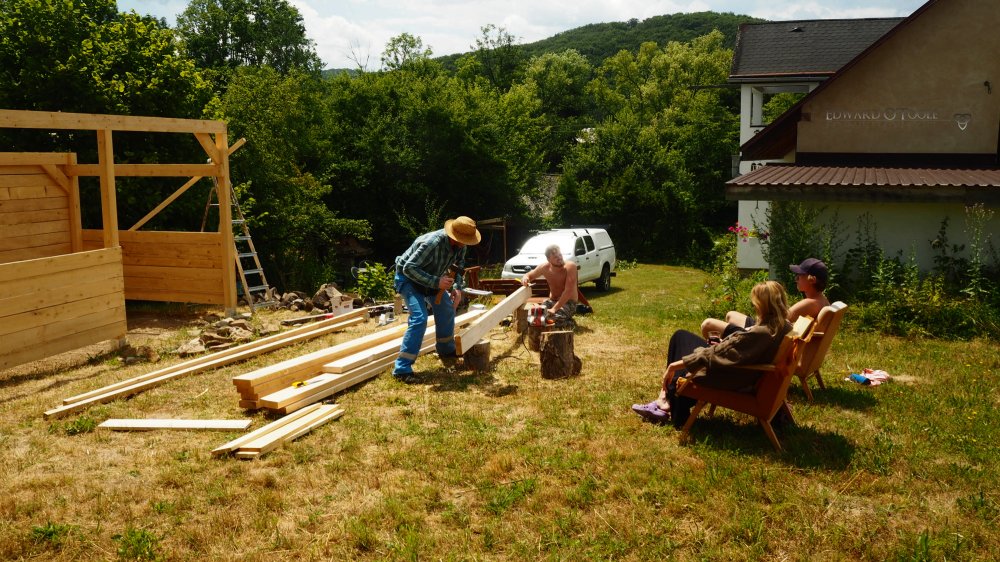 Still the sun beat down and every day we had to make the 30 kilometre round trip to the iron mongers to get screws or something else necessary to continue construction. One Sunday my wife and I even made a 120 kilometre round trip into Poland to visit a DIY store, OBI, only to discover it was closed on Sundays, even though its website had shown it was open.

My daughter even made a rare appearance as she hates the sun and heat, and she treated some of the wood before returning to the dark and dankness of her room. 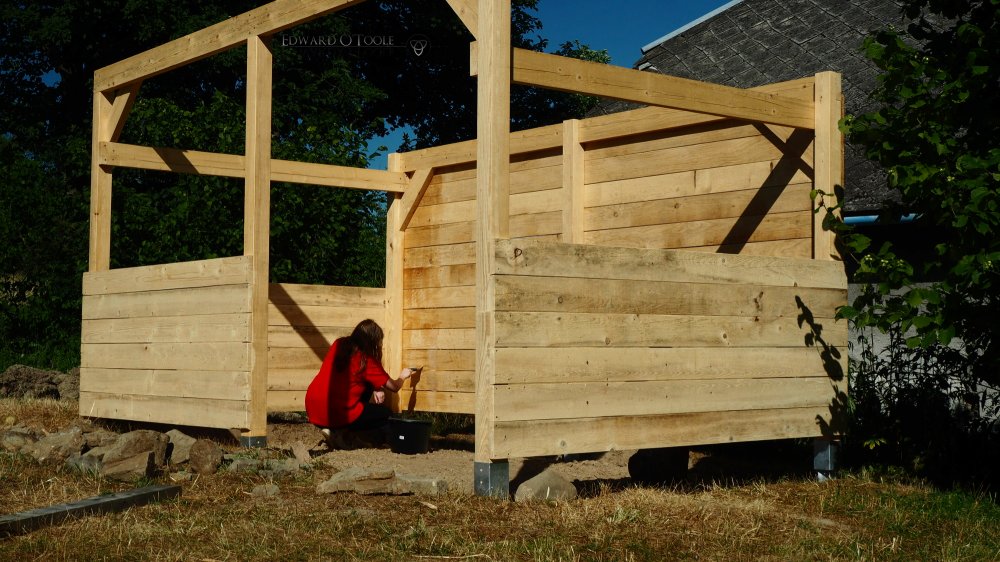 It was little things like buying clear wood treatment (35 Euros) which really broke the budget and which came as a big shock. Ultimately, the wood was the cheapest part of the entire job. 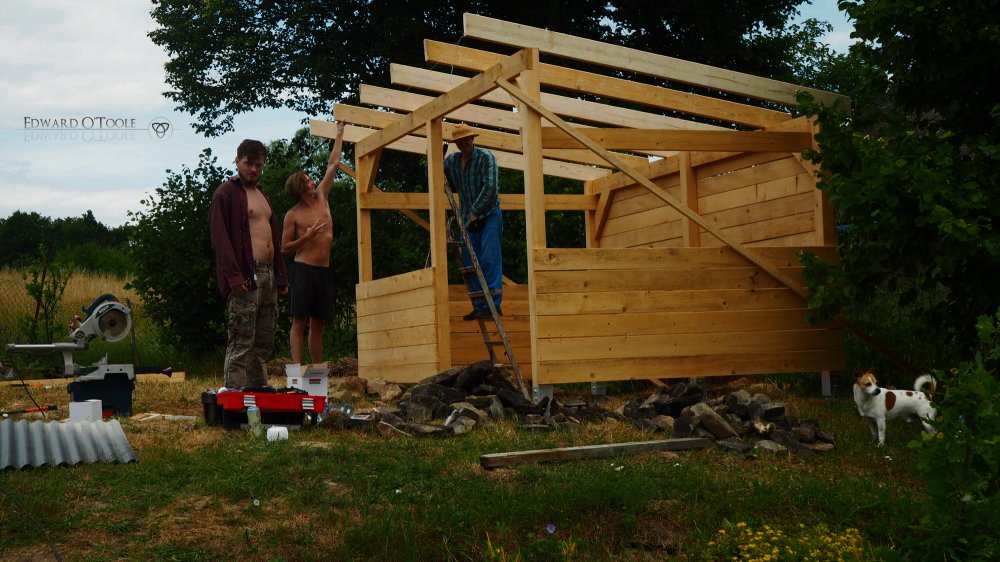 We finally reached the point where the roof slats were in place and we thought we had ordered enough roof tiles to finish building. Rusty departed, leaving me the cordless drill for a week or two so I could finish everything off. I can honestly say that putting up roof tiles is one of the most stressful things you can do, especially when you keep missing the roof slats with the screws and you’re just making holes where you shouldn’t (which I fixed by cutting up a black plastic energy drink bottle).

With Rusty gone I had to use a hand saw to individually cut planks at angles to finish the sides, and our budget stretched ever onwards as we bought paint can after paint can (we still haven’t finished that part). My wife’s priority was hanging flowers but I had to keep her happy. 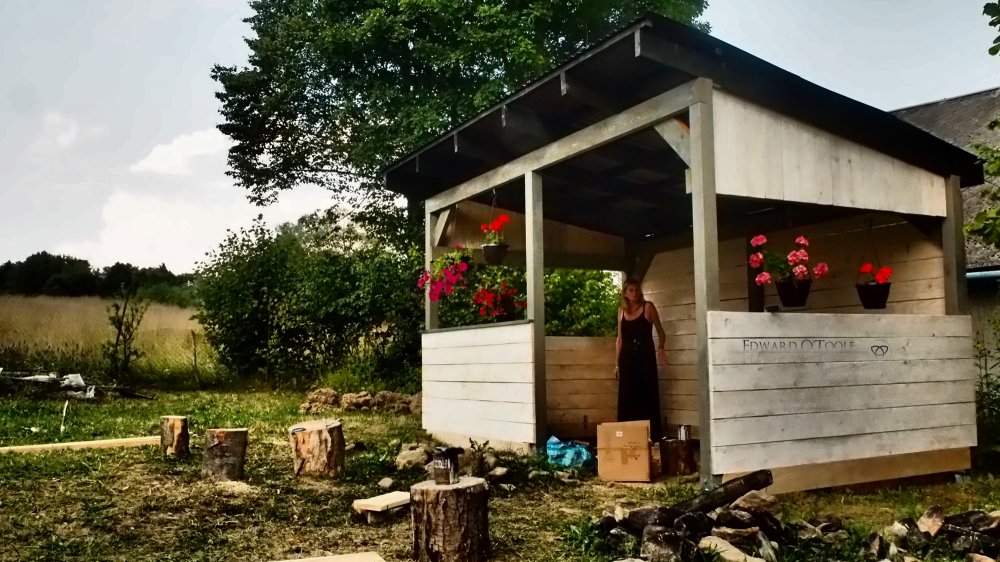 With the gazebo basically done (excluding the lower part), we again turned our focus on the woodshed. Not having enough roof tiles we had to order more, plus pay courier fees, plus go buy more screws, nails and metal joints. 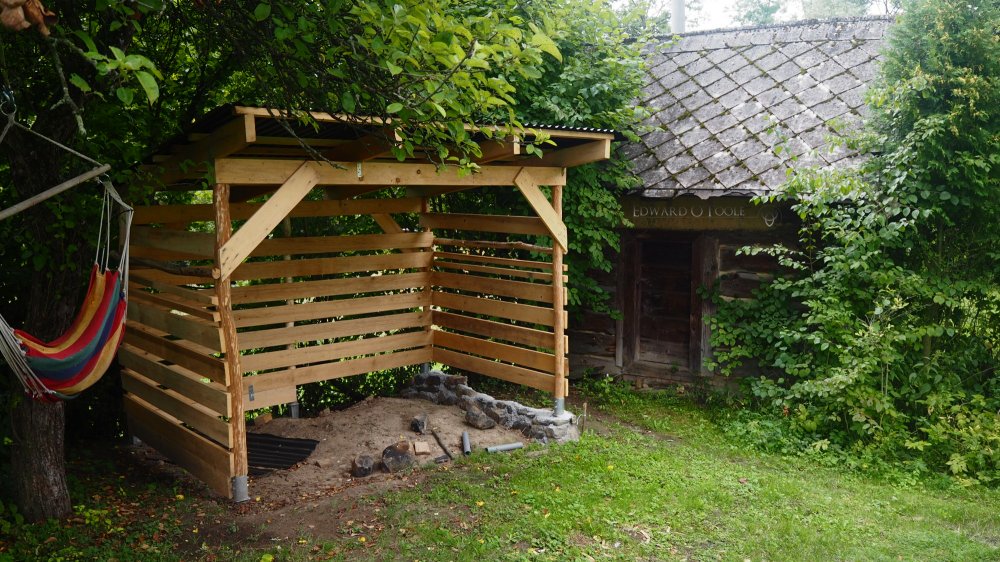 And that’s currently as they stand. For the moment we’re not doing anything as we had to stop in order to drive around Europe for a much-needed holiday. I still need to finish the supporting wall, paint stuff and of course lay floors for both. But with us having gone way past budget and us all being burned out from the work, they will perhaps stay as they are until next year. I have to finish the woodhsed and then we’ll begin the ardous task of stocking it (we still need to get another truck load of logs soon to season for next year). I want the gazebo to look amazing so I think I’ll wait on that one.

However, the feeling of being able to build something oneself, on one’s own property, out of natural and locally sourced or foraged materials is an indescribable one. Self-reliance, self-confidence and doors open to multiple future possibilities. I hope my boys remember this when they’re older and realise just what they’re capable of if they put their minds, will and physical strength to it.