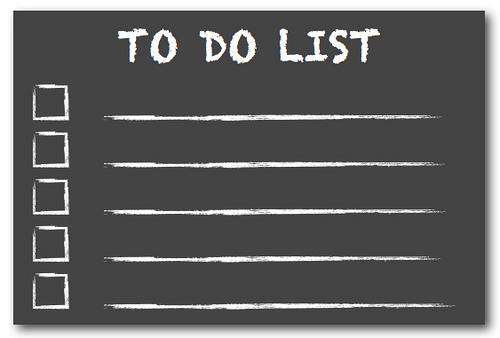 Many years back, a wise old school friend (who now owns the excellent graphics company www.birdandbee.co.uk) suggested that I make a list of 10 things I wanted to do or have in life, and then go do them. The object is to keep this list in focus and concentrate all effort on fulfilling each point.

It’s not important to have an exact description of each point, just a vague one. For example, I wanted a house in the country. By making this “I want an 18th Century stone cottage in Cornwall’, I would have massively limited myself and also excluded thousands of other potential locations and dwellings. The aim is to have a point in focus – ‘I want a house in the country’, and then concentrate on attaining that goal.

Without having a definite list of goals in life, we can often feel lost. I improved on my friend’s idea by adding a second list – a short term list of goals. While it is extremely important to have life goals (kids, house, career, etc), we also need something in the short term that we can reach and which will give us a positive boost in confidence. And which can tell us if we’re going the right way or if we need to stop and think about changing our life’s direction.

The great thing about the 10 Things To Do List is that it changes over time. What you wanted to do when you were 18 may not be what you want to do when you’re 40. Over time, you’ll ‘tick’ off several items on the list and you can then replace these with other goals more suited to your current way of thinking.

Life can sometimes be hard and we all go through ups and downs, some more than others, so some points on the list may have to sit on the back burner until they’re more feasible. But, by keeping these goals in mind, it gives you something to strive towards. Today may be awful but by persevering you can achieve what you want. The list can also show you just why things might currently be bad for you. If that house in the country seems an impossible goal in your current circumstances, it means you’re not going the right way and you need to take stock of your situation and change some things about how you’re living.

As an example, here is my list (in no particular order) and the current results:

I need to make out a new list, including the points I still haven’t yet attained.

Now it’s your turn. Post your list here so you’ll have a record of it and it can inspire others!