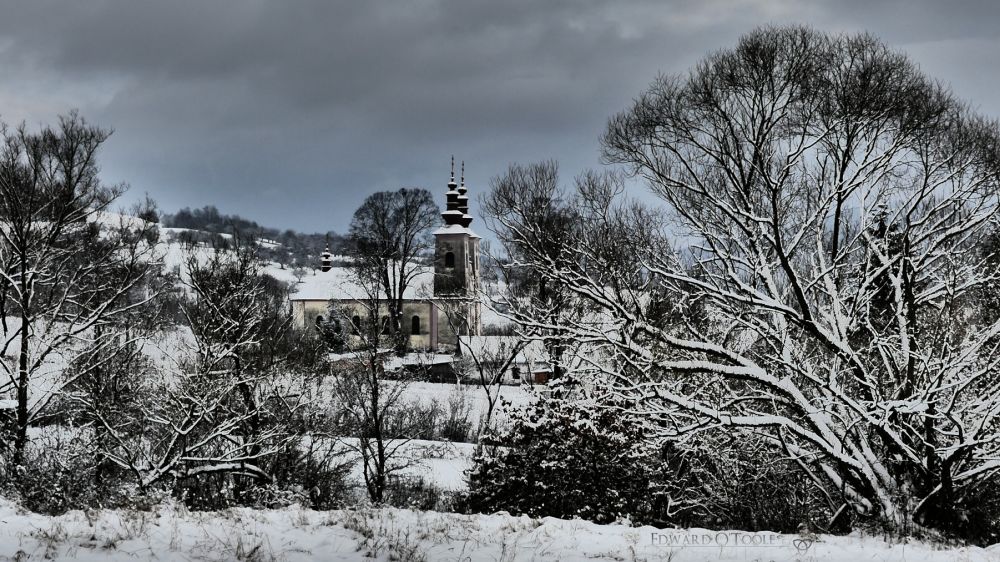 It’s again been a couple of months since I updated my blog, and quite a bit has happened. One reason I haven’t been posting often is that I’ve been focusing on making videos for my YouTube channel Carpathian Adventure. I’ve been procrastinating for a long time, and the adpocalypse (plus the major censoring) had me doubting whether it was worth putting in the effort – only to have content deleted because it didn’t fit someone’s ‘woke’ perspective of the world. But, what the Hell, I figured. Do it anyway. So you can go and check out some of the content I’ve published (and will continue to publish) if you get some free time.

My daughter and eldest son designed the new logo:

At some point I will concentrate on getting my old Carpathian Adventure blog up and running also.

Another major factor why I’ve been tardy with posting is because I and my entire family came down with COVID 19 over the Christmas holidays. My wife was diagnosed positive on the 23rd, although my daughter had shown the fatigue and cold symptoms a week prior. Because the government changed the law on the 22nd stipulating that any close contacts had to go for two PCR tests, and instead must just self quarantine, we all just stayed home at the house for 10 days. My wife and I got hit quite hard by the coronavirus – with both of us having similar symptoms such as loss of smell and taste, loss of breath, cough and heavy fatigue. Seriously, just walking up the stairs required half an hour sit down. On top of that I had problems breathing and I occasionally had ‘brain fog’ – a weird Alzheimer’s-like effect of confusion and forgetting what I was supposed to be doing. My wife’s symptoms continued for much longer than mine, and we both suffered a ‘re-bout’ about 10 days after first being diagnosed, even after thinking it had finished. We’re still suffering to a certain extent, especially with the cough, loss of breath and fatigue. Thankfully, my kids didn’t suffer too badly, apart from my younger son having quite a bad bronchial cough.

Christmas Eve, Christmas Day and Boxing Day were just a blur. Because we were positive we couldn’t go to my wife’s sister’s for a family Slovak Christmas Eve dinner, and instead my wife had to make the 13 traditional dishes at home. It’s hard to explain but we did everything that was required but in a weird unemotional robotic fashion, including unwrapping the presents on Christmas morning. It was like there was neither stress nor joy throughout that entire period – a bit like watching someone else do it on television, rather than being there yourself. Thankfully, we had all the kids’ presents in and had stocked up on food prior to both coming down with COVID and also the surprise national lockdown (which we’re still in and will be until February 7th). Many people had left it too late to do their Christmas shopping, and courier services were running way behind schedule as they couldn’t keep up with demand, so many probably didn’t have a nice Christmas at all. Especially as all the shops were forced closed and even supermarkets sealed off “non-essential” goods – such as clothes, books and toys.

Ordinarily, we move back to the town flat after Hallowe’en but, because of the continued lockdowns and my kids having distant learning at both grammar school and medical universities, this year we decided to continue staying at the house until after New Year. It’s now almost the end of January and it doesn’t look like we’re going anywhere for the foreseeable future, not unless the boys go back to uni. As such, it’s been quite hard to keep the house warm. We’ve had the living room fire going continuously night and day for several months now, which is quite a task. I can honestly say that whoever came up with distant learning for school kids has never had children of their own. It is torture for my daughter to have to sit in front of a computer monitor from 0730 to 1400 each day, with only 5 minutes break between lessons and no personal contact with other pupils, then continue working until sometimes late every evening doing homework or preparing for tests. Just shut in a room, 5 days a week, with no form of socialization. Psychology obviously wasn’t a deciding factor in that ruling, but I bet it looks good on some bureaucrat’s to-do chart.

After an entire year of torrential rain and virtually no Summer or Autumn, Winter basically looked like it would be the same. And then we got hit by a heavy freeze in early December, when the temperature dropped to minus 13 Celsius. 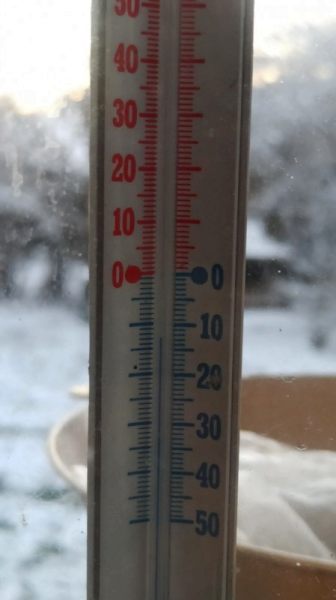 It was crazy watching the forests literally freeze while everywhere else was just thick mud. 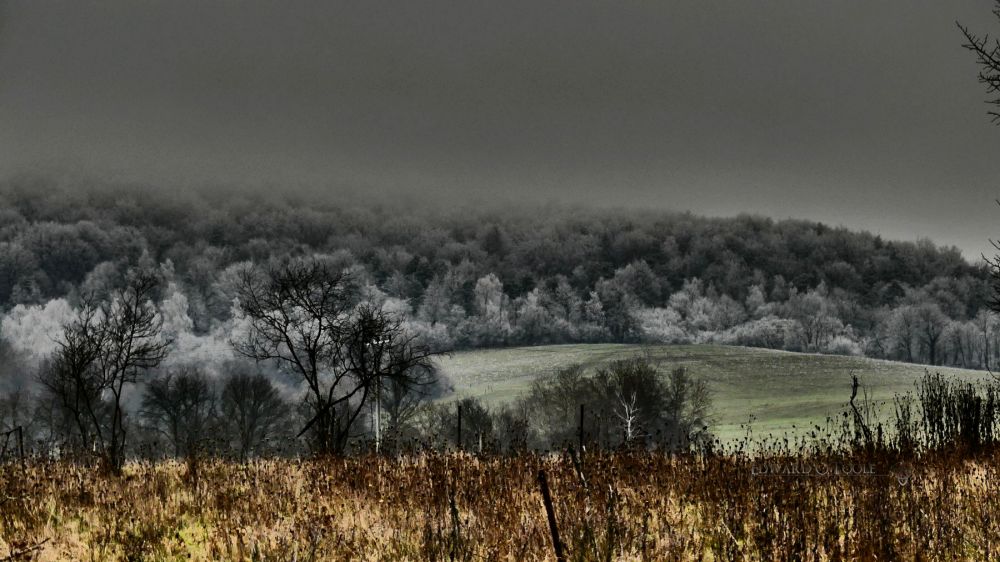 We had a little snow in the weeks leading up to Christmas but this melted and, along with constant rain and around zero temperatures, this all just turned into more mud.

And then the temperatures plummeted and it began to snow heavily (ironically, Orthodox Christmas on Jan 6th and Orthodox New Year on Jan 15th where white). 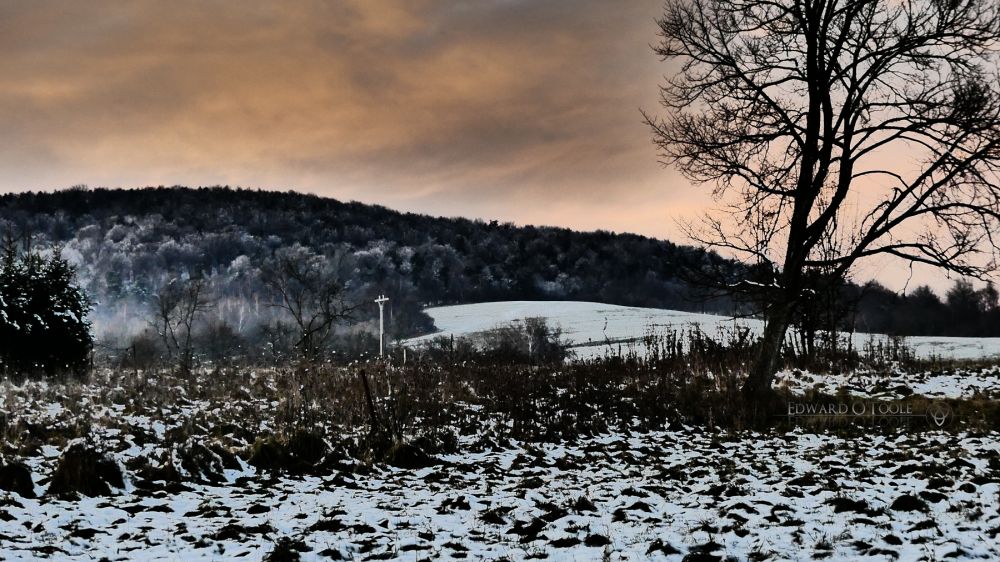 The other night we had minus 20 Celsius and the battle to stay warm began in earnest. Daytime temperatures were (until yesterday, when it began to warm up and the snow melt) between minus 7 and minus 13 C. We’ve had it much worse in the past, and for longer periods (sometimes until April) but usually we’re back in the flat for the coldest period. The 9 metres of wood we collected, chopped and stacked last year will not last us until Easter so we need to start looking to get some more seasoned stuff – which is basically gold dust during Winter and we’ll pay ridiculous prices for it. I am rationing what we’ve got, and mixing 80% fresh cut with 20% seasoned to get the fire hot enough to burn the unseasoned stuff, but I doubt if it will be enough. Thankfully, this year we invested in some more electric oil radiators with thermostats, which do take a lot of pressure off of the three fireplaces.

As usual, Winter affects the cars and driving (I won’t even talk about my poor motorbike, Scarlet, which hasn’t been ridden for months now, or my Discovery, Vlocka, which has sat in the same carpark for a year now). That’s a constant battle everyday to get them started, their windows scraped free of ice and keep them on the road, then to safely get to wherever we’re going. 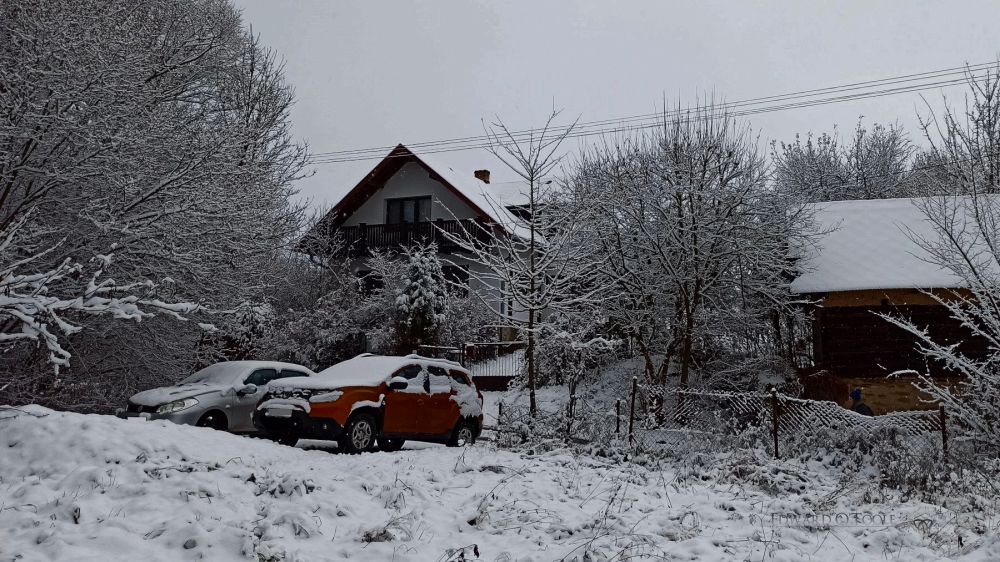 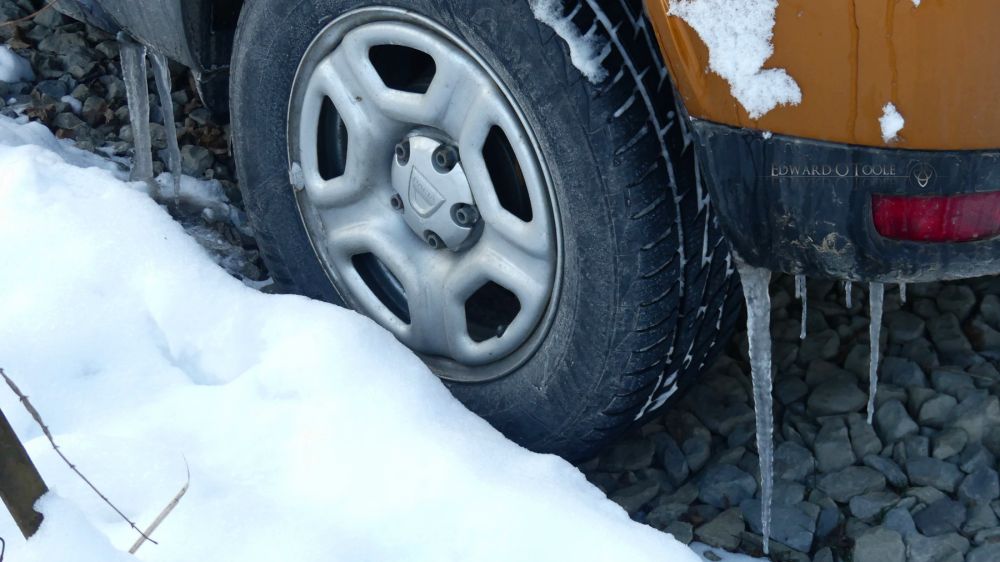 One good thing about being locked-down or in quarantine is that we’re having to rely much more on home-cooked foods. Even being allowed to buy food in a supermarket requires a 30 kilometre round trip, and when the roads are thick with snow and ice it becomes prudent to use what you’ve got rather than go out to buy more (cough, stock up and prep….). As such, my wife has made bread from scratch (which tastes gorgeous – just flour, water, live yeast and salt), and both she and my daughter regularly bake different kinds of cakes. Plus all the goulash and home-made soups. After chopping wood in the freezing cold, there’s nothing better than eating home-made soup with fresh home-made bread next to a log fire. On a long wooden table you made yourself. 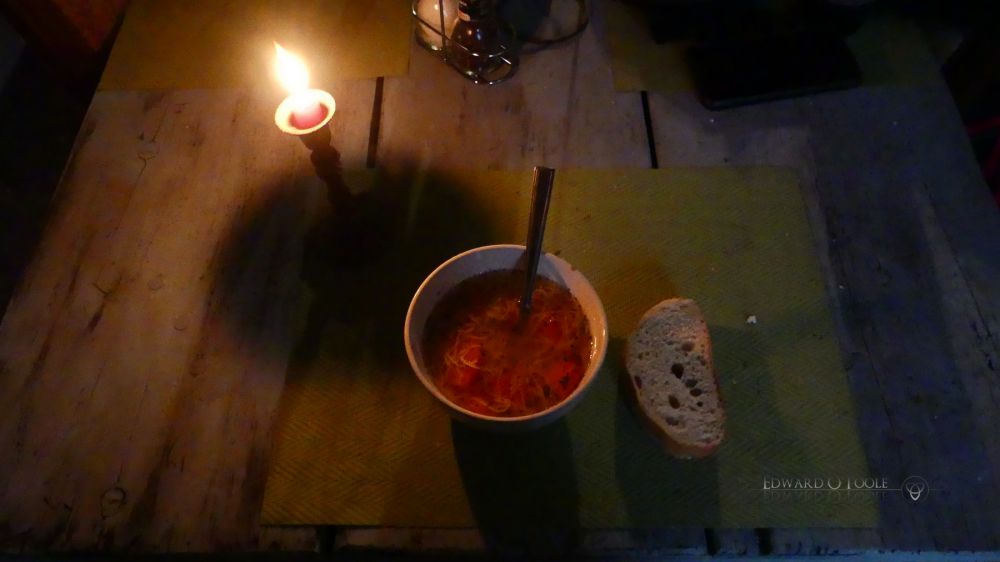 With all the bans on shopping over the last year continuing into 2021, we’ve all really lost the urge to buy new stuff and instead are going through our wardrobes which are crammed with clothes we’ve bought in the past and probably only ever worn a couple of times. The number of items which we haven’t worn because we were keeping them for ‘special occasions’ is just incredible. It’s amazing how wasteful we, and most other people, have become. Chasing marketing-induced fashion adds a huge burden to the environment, as does eating pre-made foods. We’re all quite enjoying a much simpler, and much more cost-effective, way of life at the moment.

One aspect of having COVID which I didn’t expect was that it really made me aware of my own mortality, and also my life choices. I guess that, after a year of media, government and WHO/Gates-inflicted fear-porn 24 hours a day, suddenly going through the disease – whatever it is and wherever it came from and whomever accidentally or deliberately released it whilst doing gain of function experiments – made me extremely conscious of what little time we have on this beautiful planet, and with whom we share that time. Nature, apparently listening, quickly replaced the constant rain and ubiquitous mud with a stunning blanket of white. And I really felt that startling beauty in my soul. It’s actually one of the reasons that inspired me to start making videos. Everything from the smallest puddle, 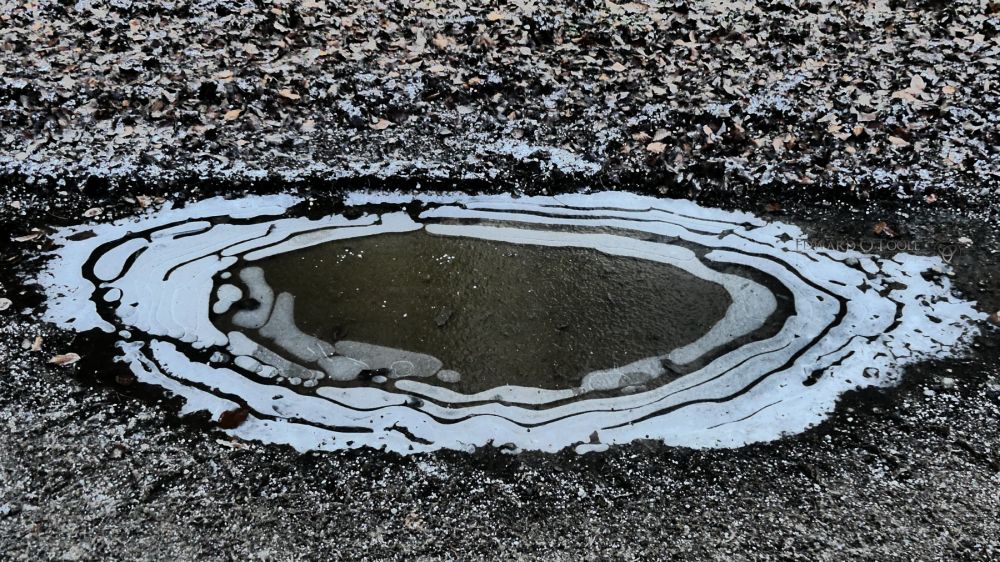 to the wide open vistas seen from the tops of Carpathian hills, 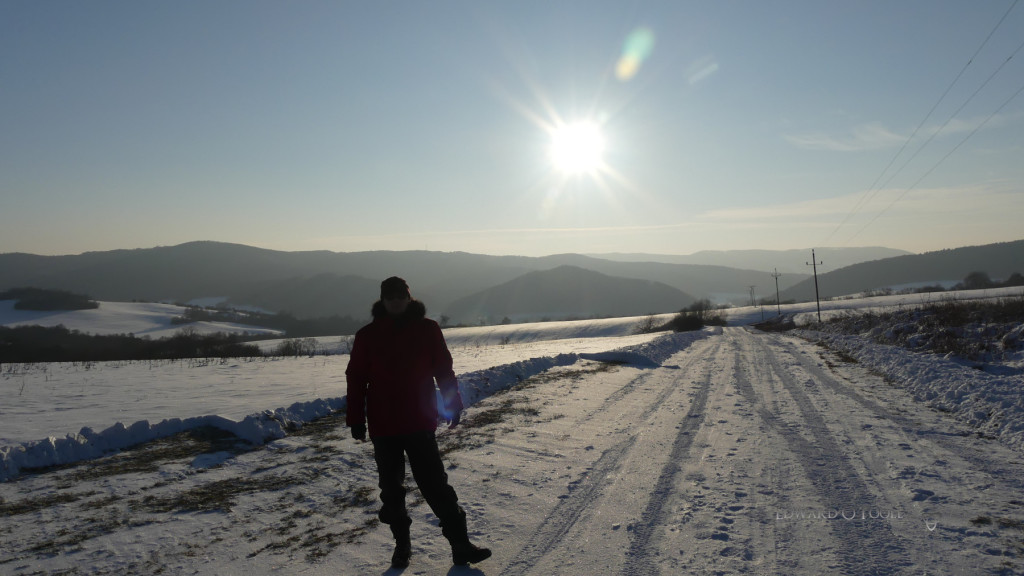 just screamed this incredible whiteness and refreshing change of ambient. Walking in the forest to make my videos, I felt regularly mesmerized by how the thin Winter sun, low over the horizon, sparkled through the trees and onto the all-engulfing carpet of white. 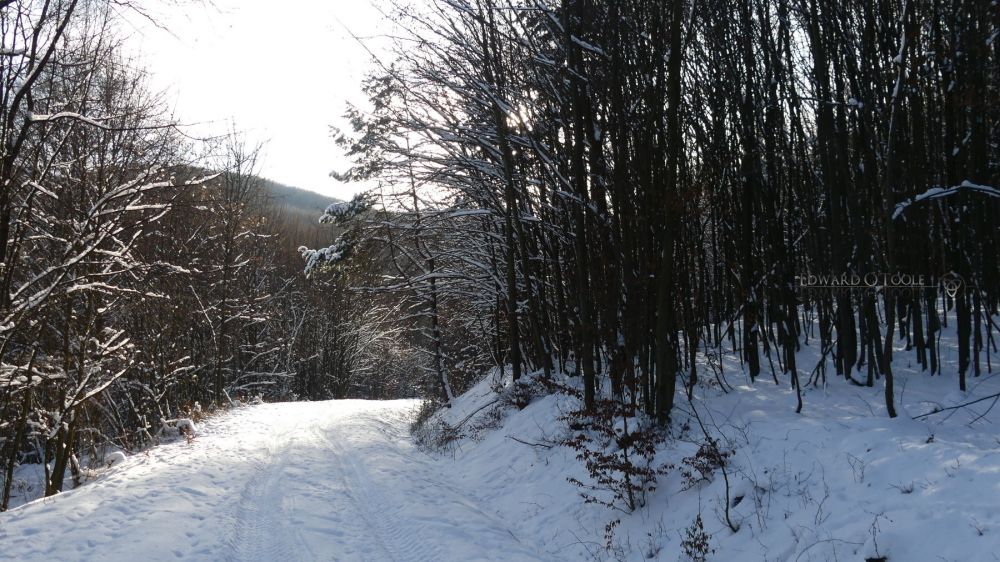 Just being in my garden felt like I was in some Narnia-esque world. 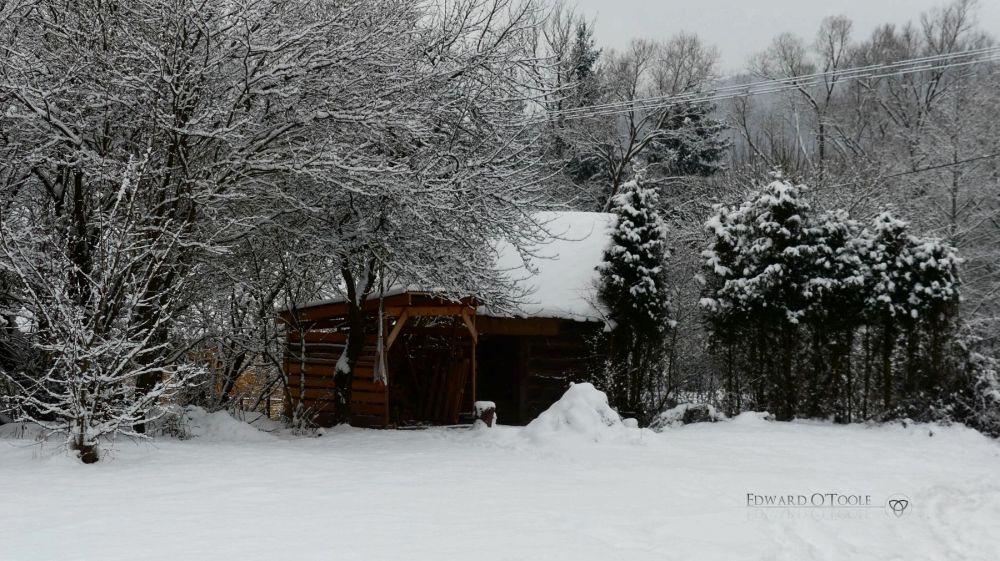 There’s still much to mull over, especially as my previous career path (or, at least a major part of how I make my various incomes) slammed hard into a brick wall during the pandemic and is basically dead now. That door has closed, and it really would be like flogging a dead thing to try and resurrect it, so I have to start focusing on other directions – and quickly. Also, since Brexit, I have lost the security and freedom to travel of being a European citizen – just ordering stuff on line from the UK will now be a battle of taxes, high postage rates and customs issues.

But I’m extremely grateful that I got to spend a year with my family at our house in the country, battling all weathers and celebrating each event together. While the world went to shit (and continues in that fashion, because there’s much more to come…), we had the chance to spend time together. And getting the virus and going through it really showed what is important in life.

Today and yesterday the weather has been awful – about 3 degrees above zero and the snow is melting, and it will continue like this until Monday when temperatures will plummet again and we’ll get a fresh batch of snow. Because of this, I’ve been unable to film outside and instead have worked on re-doing the film I produced during the national lockdown leading up to Hallowe’en – Leshy. Today I will be releasing the second, much better, version on Youtube, so please check it out and hopefully it will inspire people to do something creative during these dark, and often lonely times: watch Leshy Found Footage Horror here 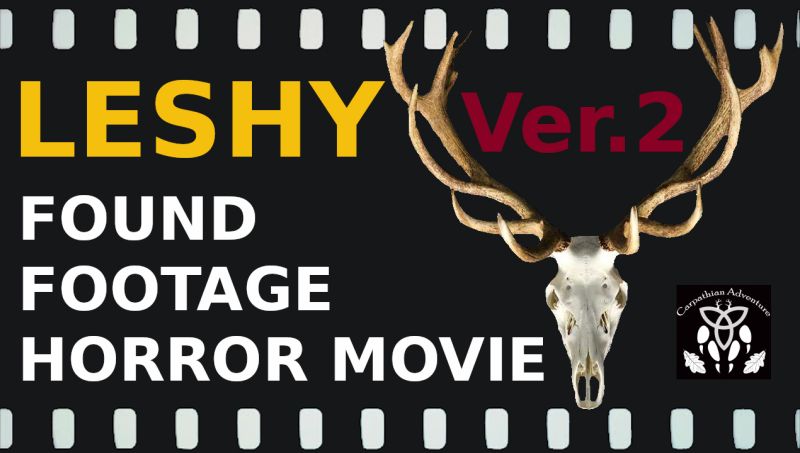