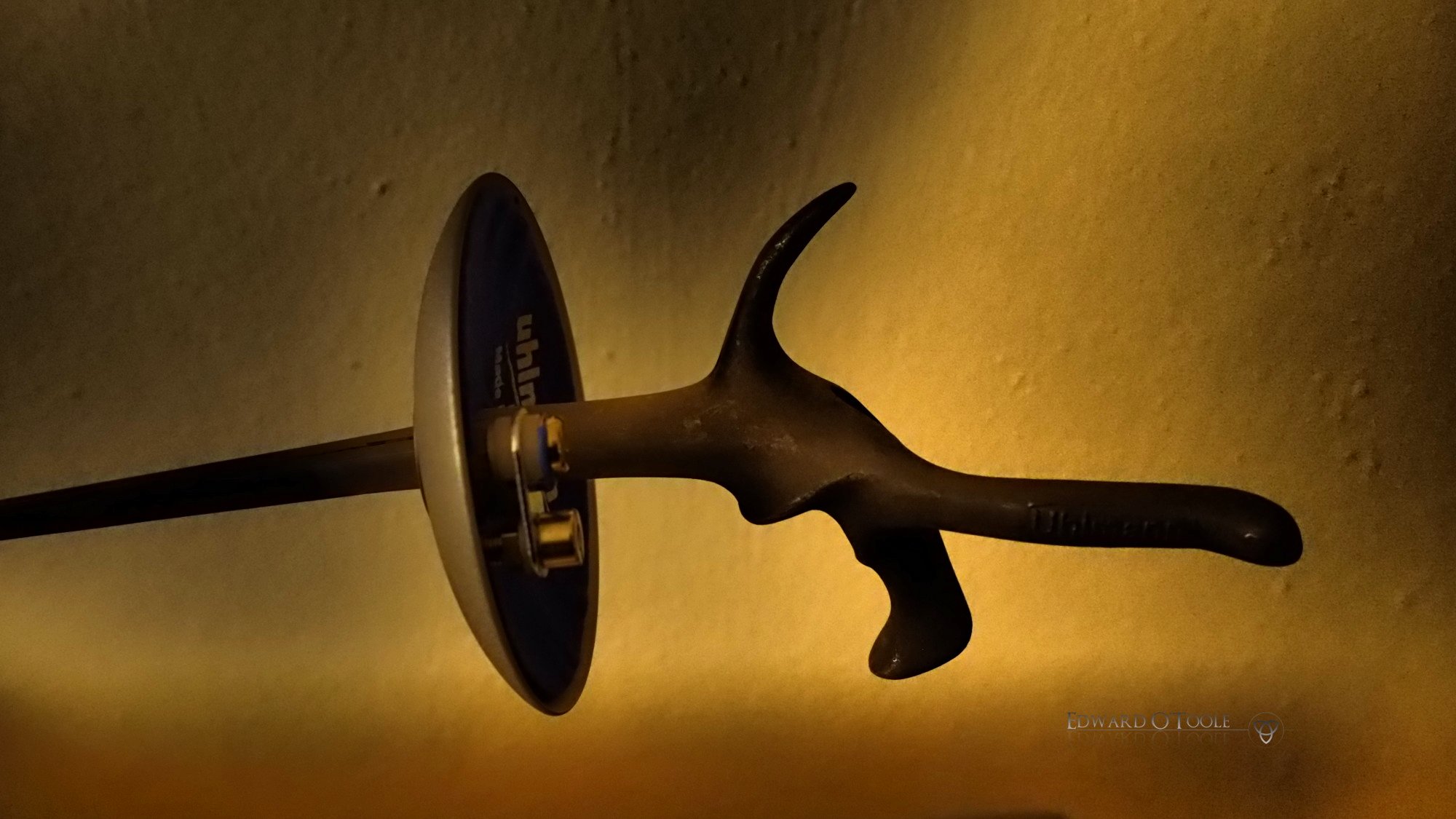 It appears to be that time of year again when swordsmanship becomes a central focus of conversation between my eldest son and myself. Last year we tried battling it out (after a suitable length of self-training) with shinai, the Japanese split bamboo weapons used in kendo. At my son’s 18th birthday party we faced off and it resulted in him crushing the knuckle on my right fore-finger.

This year we’ve gone in a different direction and have chosen foil fencing, Steam variety (e.g. no electrics). I would have personally preferred epee as it has far less rules than foil, plus most of the body is a viable target rather than just the chest and back, or even sabre as it permits slashing – but my son rejected that idea as he finds it ludicrous to be using a 300 gramme sword when a real sabre is 700 grammes and up. 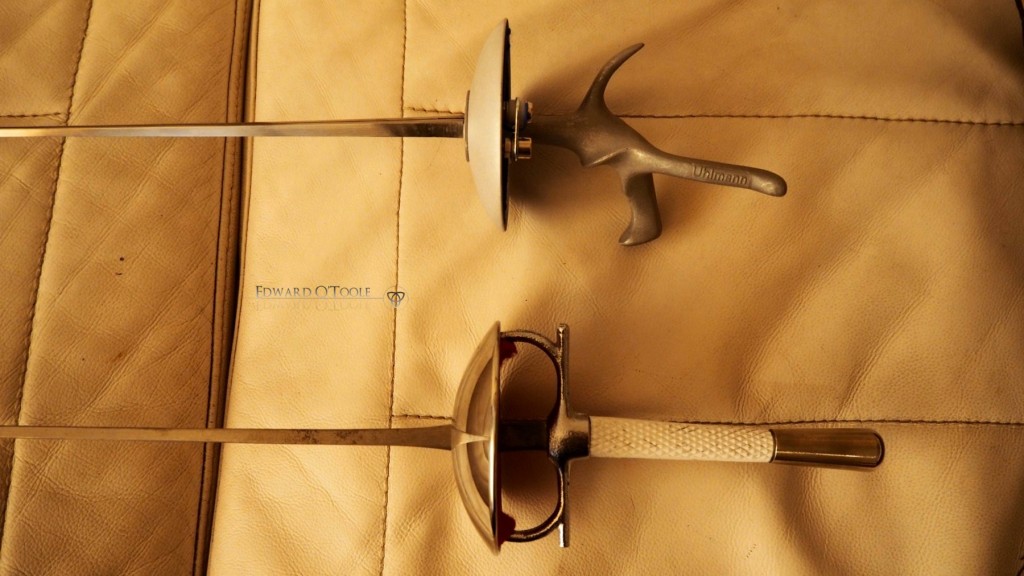 Our personal preferences shone through in our selection of swords. Brano is about as old school as you get so went with an Allstar Italian grip foil, while I went with an Uhlmann pistol grip from Ruby Fencing in the Czech Republic.  I was extremely pleased with their communication and fast delivery. I had wanted a Leon Paul (and still do) but the Nation-specific branches don’t cover Slovakia, and the head office in the UK is less than flexible. They expected me to pay 96 GBP postage for a 46 GBP sword. At most the postage should have been 20 to 30 GBP. At some point I’ll buy an antique Leon Paul, just to have one, but I don’t think I’ll be making any big orders from the contemporary company in the near future – not unless they make some drastic changes in export policy. 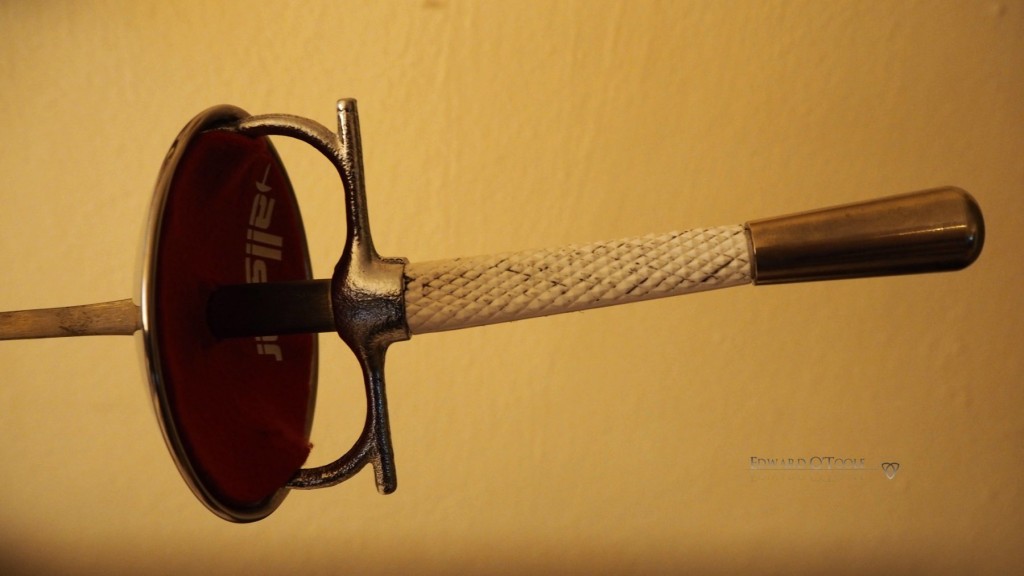 The tips of the swords are very different  as mine appears to be electric while my son’s Italian grip is purely Steam. 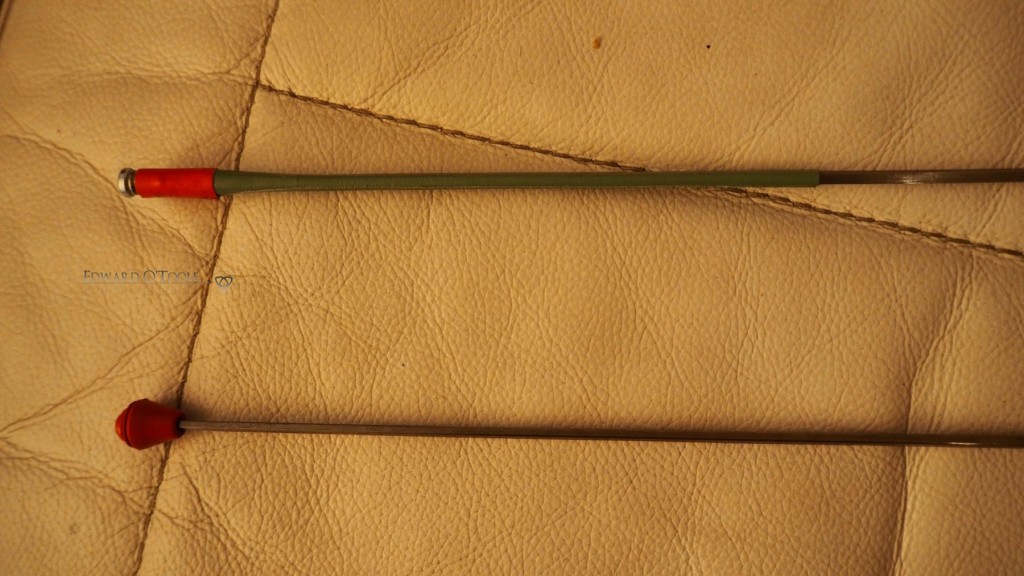 Now I just have to source masks and jackets. While we would both love to re-enact Mensur Academic Fencing, as we’re not attending pre-Great War Heidelberg the horrendous facial scarring it incurs would seem a bit pretentious. I mean, I know Manfred von Richthofen will always be a fashion icon, but…

So that’s the current plan, although we’ll have to wait to move back to the house for space to spar. Ultimately, it would be great to get full HEMA (Historical European Martial Arts) gear and sabres but that would be a huge investment. As there are no clubs (either Olympic fencing or HEMA) anywhere in the vicinity, there’s no point in getting fully kitted out just yet. Besides, we do it for fun and to experience history rather than to win medals. Plus, every gentleman should know how to handle a sword.

Swords and knives truly are – or at least should aspire to be – the perfect blending of aesthetics and functional technology. They are works of functional art in their own right, plus the skill required to use them (be it katana, epee or bastard sword) is one sorely missed in modern society as it teaches decorum, grace, balance, politesse and self-confidence.